What safety factors have been used to establish allowable loads for your curtain-wall clips?

The typical safety factor (Ω) used to determine the allowable connector loads ranges from 2.25 to 2.45. Safety factors have been established through testing in accordance with ICC-ES Acceptance Criteria for Connectors Used with Cold-Formed Steel Structural Members (AC261) and Chapter F of the AISI North American Specification for the Design of Cold-Formed Steel Structural Members (S100-2007). Values depend on the test failure mode, the coefficient of variation of the test results, and the number of tests performed.

For the allowable anchorage loads, the safety factor is established in the same manner as connectors described above if the test is limited by the connector, screws, or welds. Higher safety factors are used if test loads are limited by the performance of anchors in concrete (Ω = 4.0) or shot pins (Ω = 5.0) to reflect the higher variability and sudden failure associated with these limit states.

For select curtain-wall connectors reference Curtain-Wall Connectors: Service Load Limits, LRFD Design Strengths, and Nominal Strengths or the information provided in the Connectors For Cold-Formed Steel Construction catalog. For other connectors, Designers can multiply allowable loads by the factors tabulated below to obtain design strength for use with LRFD. Can I use Simpson Strong-Tie® Titen® hex-head screws, PDPT pins, or PDPAT pins to anchor curtain-wall clips when resisting seismic loads? See below for further information.

Design strengths obtained in this manner will be accurate for conditions where allowable loads are controlled by strength limits, and conservative if the allowable load is limited by serviceability (deflection) criteria. For serviceability checks, the tabulated allowable loads can conservatively be considered to correspond to a deflection of 1/8" in the direction of the applied load. If more detailed information regarding LRFD design strengths is required, please contact Simpson Strong-Tie.

Do tabulated allowable loads for the FCB bypass framing fixed clips consider combined loads? If not, how should I account for them?

No, combined loads are not considered as testing was performed separately for each load direction (F2 – tension, F3 – compression, and F4 – vertical). Currently, we recommend Designers use whatever interaction equation they have used in the past. In the absence of other guidance, a linear interaction equation is suggested.

Based on the design conditions, I sometimes assume moment created by the eccentric weight of the curtain-wall is resisted entirely in the anchorage of the fixed clip to the structure, and other times assume it is resisted by horizontal forces at adjacent floor levels. How do I use your allowable loads to address both of these conditions?

How close to the web punch-out in the stud can I install your connectors?

Designers can determine this dimension in the same manner used for any other connection. A general rule of thumb is that the clip should not be within 1/2 of the stud depth from the top or bottom edge of the punch-out.

I need to transfer in-plane loads from the curtain-wall to the main building structure. Do you provide allowable loads for this load direction?

Yes. Allowable in-plane loads (what we refer to as 'F1' loads), are published in the Simpson Strong-Tie® Connectors For Cold-Formed Steel Construction catalog.

I need to accommodate inter-story drift in the design of my curtain-wall. Do you have a drift clip or other recommendations?

What is the maximum thickness stud I can attach to using the #14 shouldered screws provided with the SCB, SCW, and SSB slide-clip connectors?

We recommend limiting the maximum design thickness of the stud to 118 mil (10 ga). This ensures that the #14 shouldered screw extends through the connection a minimum of three exposed threads as required by code.

How should I install the #14 shouldered screws provided with the SCB, SCW, and SSB slide-clip connectors?

Simpson Strong-Tie recommends the shouldered screws be installed as follows: 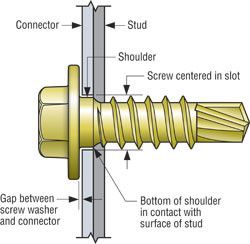 Currently, there are no acceptance criteria that can be used as the basis to issue a code report for concrete screws or shot pins installed in connectors. ICC-ES publishes criteria to establish allowable and design strengths for concrete screws (AC193) and shot pins (AC70), but these apply only to individual fasteners. Since the demand on the fasteners is complicated and difficult to accurately predict, testing of the complete system of the connector and anchors is required. Our PDPT and PDPAT powder-actuated fasteners have been qualified under AC70 and are listed in ICC-ES ESR 2138 for installation into ASTM A36 steel, ASTM A572 Grade 50 steel, and concrete.

Yes, but only under certain conditions. Our Titen hex-head screws are not listed in a product evaluation report, so Designers should check with the local building official regarding their use to resist seismic loads. PDPAT pins may be used to anchor curtain-wall clips resisting seismic loads based on Seismic Design Category (SDC) as follows:

I've seen standard details for wall stud bridging that show the cold-rolled channel attached to the stud with a clip angle of length equal to either 80% of the stud depth or 1/2" less than the stud depth. Do the Simpson Strong-Tie® SUBH and MSUBH bridging connectors comply with the code, and do the generic clip angle length requirements contained in these details apply?

The Simpson Strong-Tie SUBH and MSUBH bridging connectors comply with the code and dimensions have been established to provide structural performance while simplifying installation. AISI S100-2007 Section D3 contains strength and stiffness requirements for all bridging connections, however, the specification does not include limitations on dimensions or restrict how the strength and stiffness of the bridging connector is achieved. Note that the standard details that include minimum dimensions for the clip angles are not part of the code. They are prescriptive details applicable to generic clip angles and therefore do not apply to the SUBH and MSUBH connectors. Instead, strength and stiffness design values for the SUBH and MSUBH connectors in studs of various depth and thickness have been established through extensive testing to ensure compliance with AISI S100-2007 Section D3 for axially and laterally loaded stud wall systems.