According to Section 12.2.3 of ASCE 7-16, when a moment frame is combined with other lateral systems in the horizontal direction, the R-value used for design in the direction under consideration shall not be greater than the least value of R for any system in that direction (i.e., when combining a wood shearwall with R = 6.5 and a steel SMF with R = 8.0, R = 6.5 shall be used for the design of the SMF).

However, there is an exception if the following three conditions are all met:

If the above three conditions are met, then lateral-resisting elements are permitted to be designed using the least value of R found in each independent line of resistance. For example, if a wood shearwall with R = 6.5 is used at the interior wall of a garage and a steel SMF is used at the front of the garage parallel to the interior shearwall, then the SMF can be designed using an R-value of 8.

When the upper system has an R-value lower than that of the lower system, the R-value of the upper system shall be used for both systems (i.e., when a SMF [R = 8] is used at the lower level and a wood shearwall is used at the upper level, R = 6.5 shall be used for the design of both systems). When it comes to retrofits with moment frames, the International Existing Building Code (IEBC) allows the use of moment frames with a higher R-value at the base regardless of the existing lateral system at the top of the frames. Check with your local building official for applicable ordinance or additional requirements. 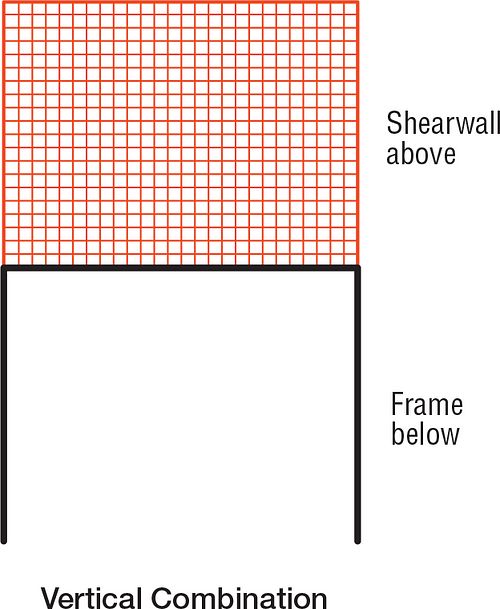 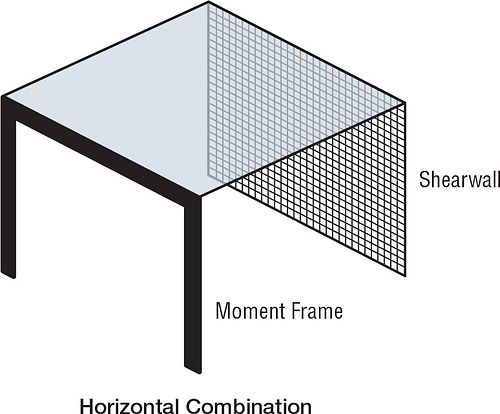 The following two pages include items a designer should consider when modeling and designing Strong Frame steel moment frames. We will discuss these in more detail later in this design guide. 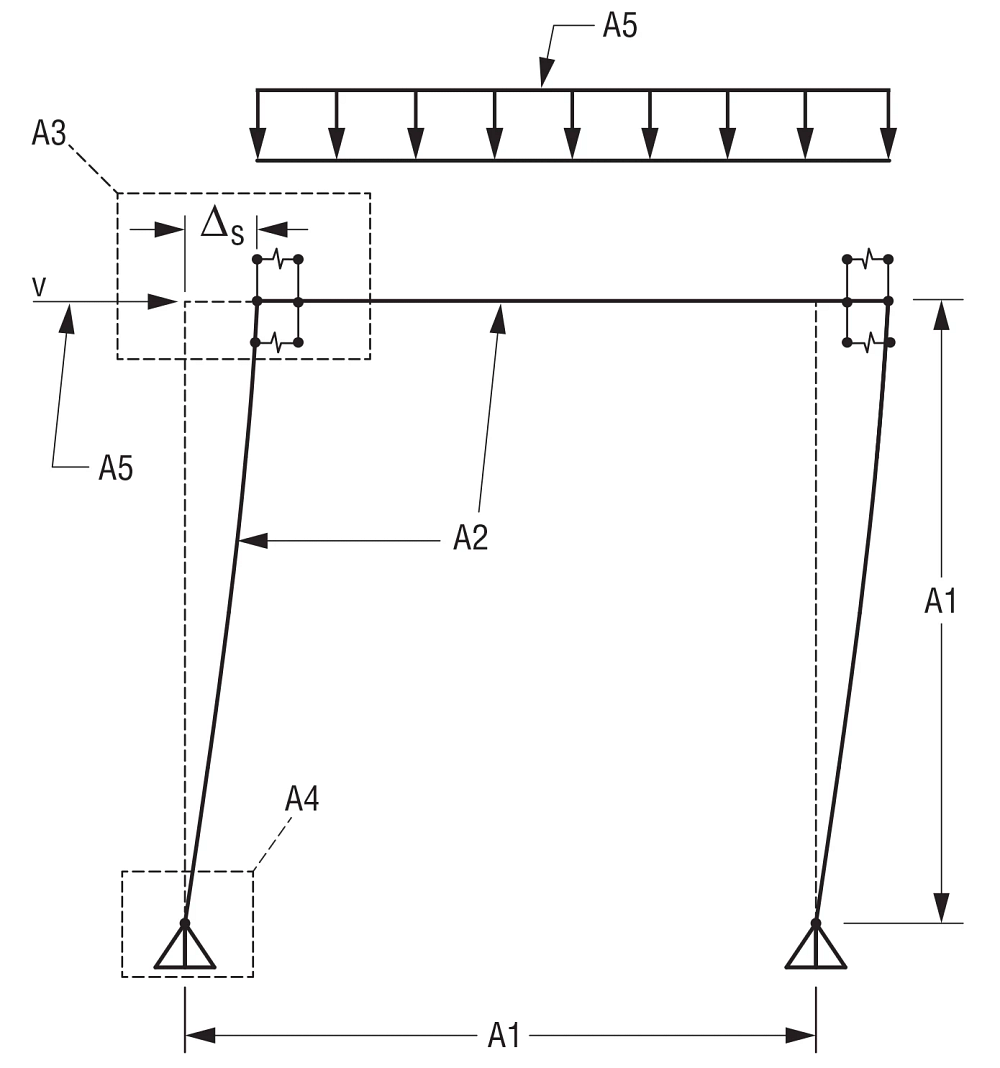 A1. Frame Geometry and Space Restrictions

Even though structural analysis and design for the Strong Frame utilizes the member centerline dimensions, in the actual application the designer needs to be aware of the actual frame geometry for the frame specification. Figure A1 below indicates the seven critical dimensions the designer will need to fit the frame within the given wall space and meet the opening requirements. A more detailed explanation of each of the items below is given in the Installer Overview section on p. 70. 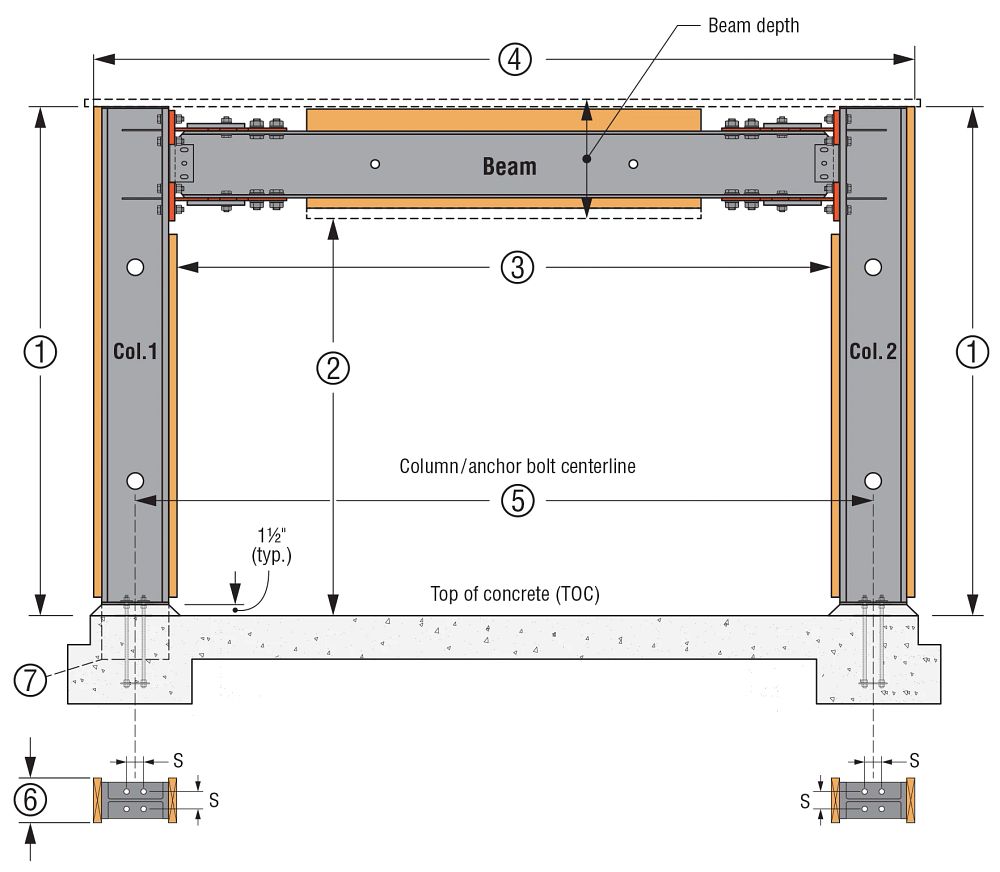 For steel frame used in wood construction, wood nailers are required for the frame to tie into the rest of the wood structure. For Strong Frame® beam and columns, we provide nailers along with the steel shapes. When considering the depth and width of the members, the designer needs to consider the steel members with the nailers attached. Figures A2a and A2b show typical details of what the beam and column look like with wood nailers attached. See Product and Service Offering section for more detailed information on member depth and width with and without wood nailers. 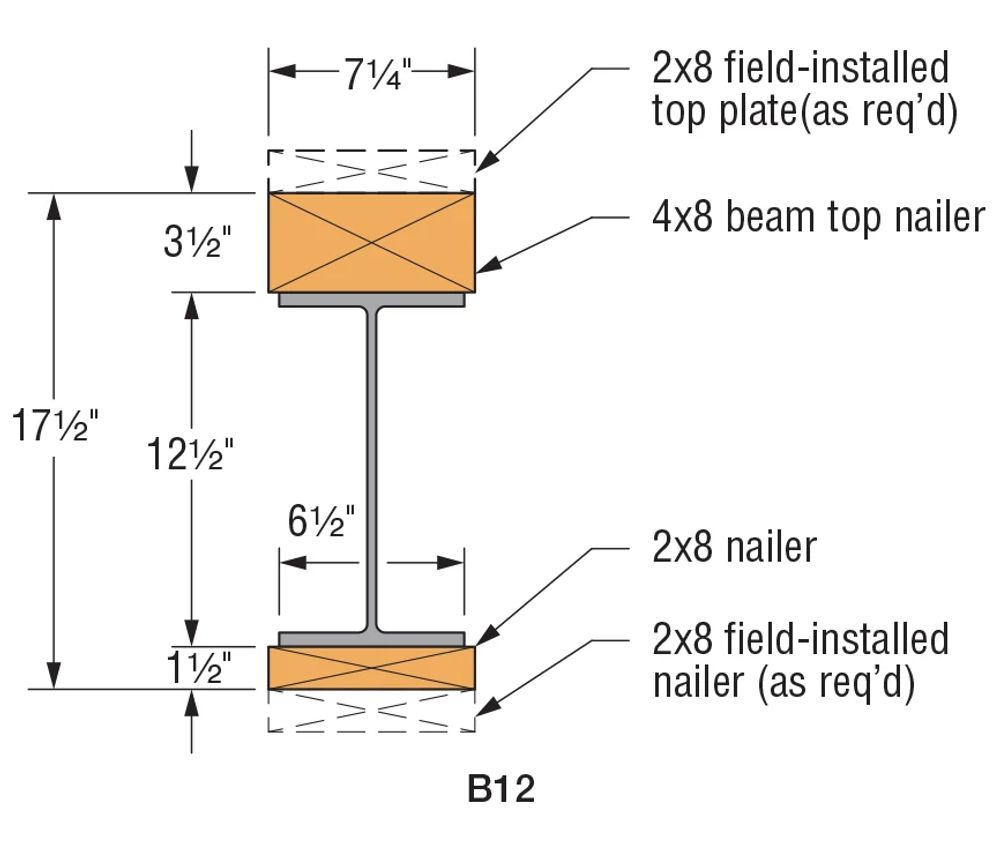 a) Beam Geometry with Nailers 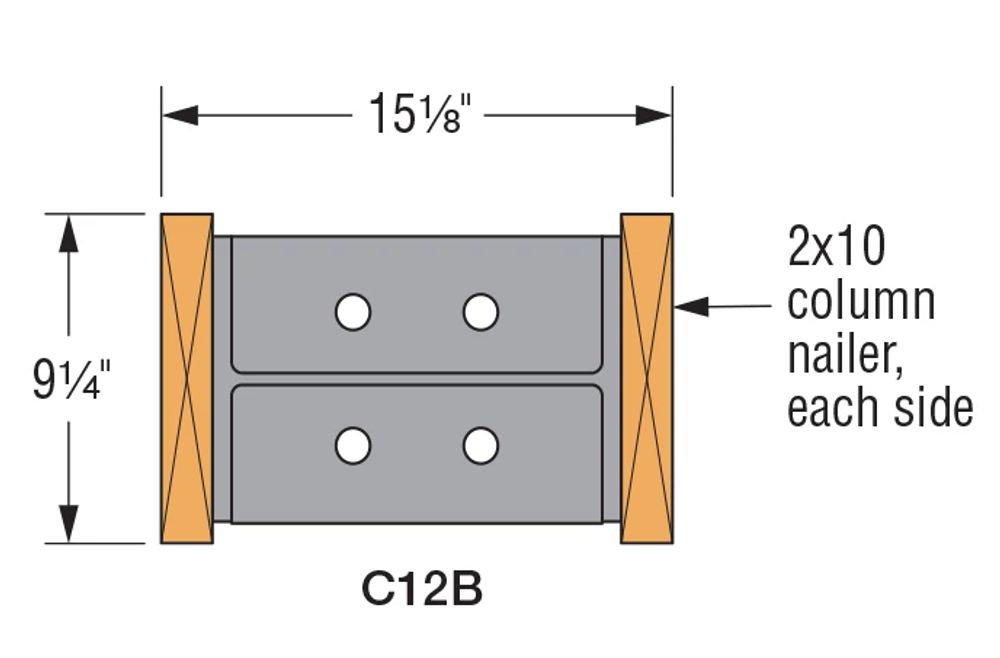 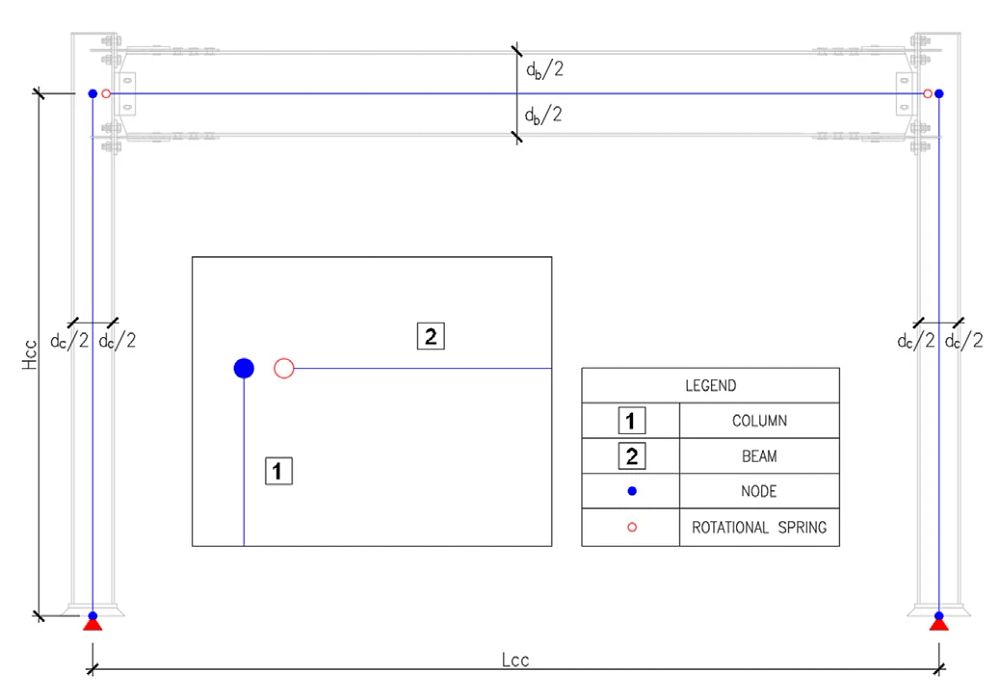 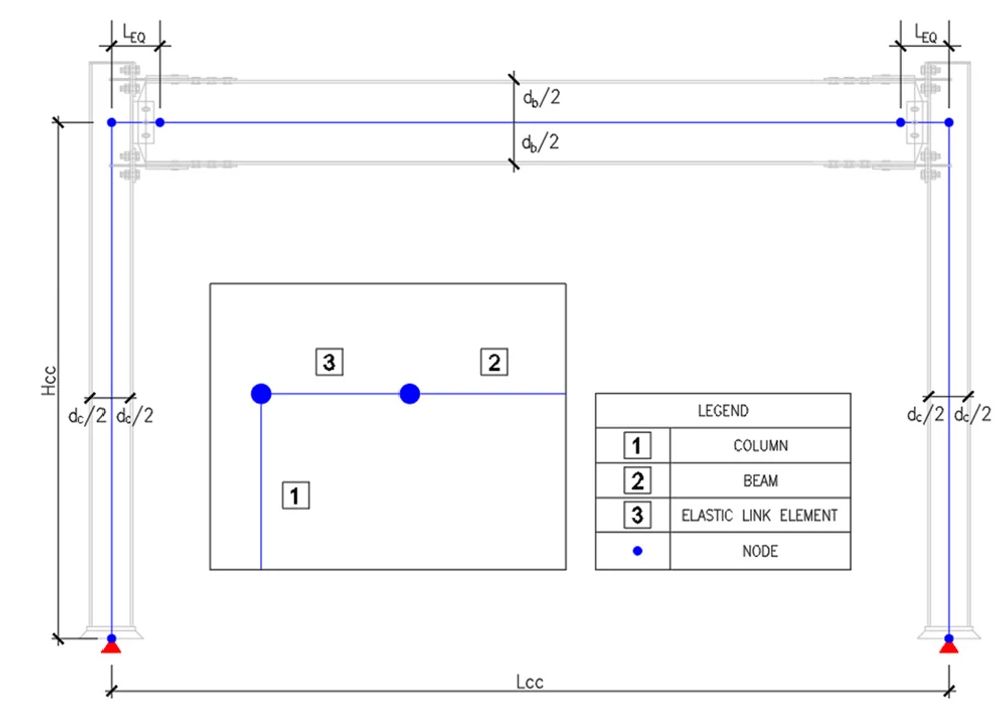 A4. Base Fixity Modeling

Since moment frame design is typically governed by drift, frame base fixity modeling for the structural analysis model plays a critical role in the analysis and design of moment frames. For typical applications, pinned base is assumed for the Strong Frame® analysis and design. However, we also offer fixed base solutions using: 1) Embedding the column into the concrete footing with a grade beam; 2) Non-embedded rigid base plate (see Figure A4 below). For more information on the effects of base fixity, please refer to the design section D7. 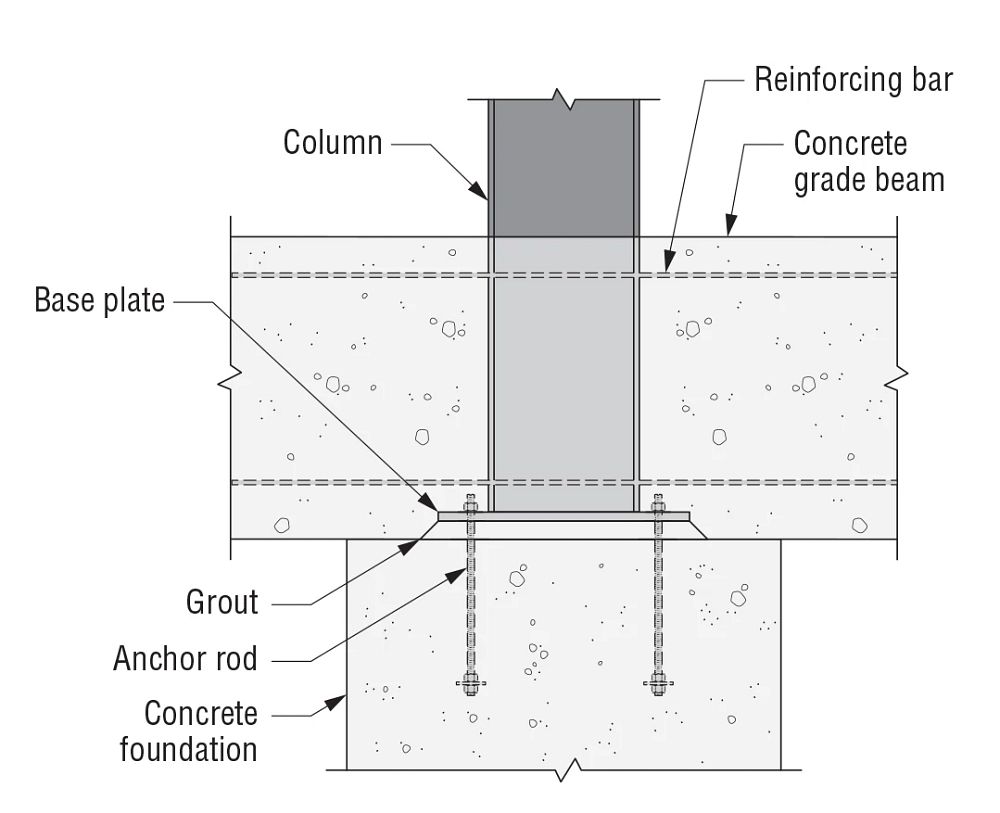 a) Embedded Column with Grade Beam 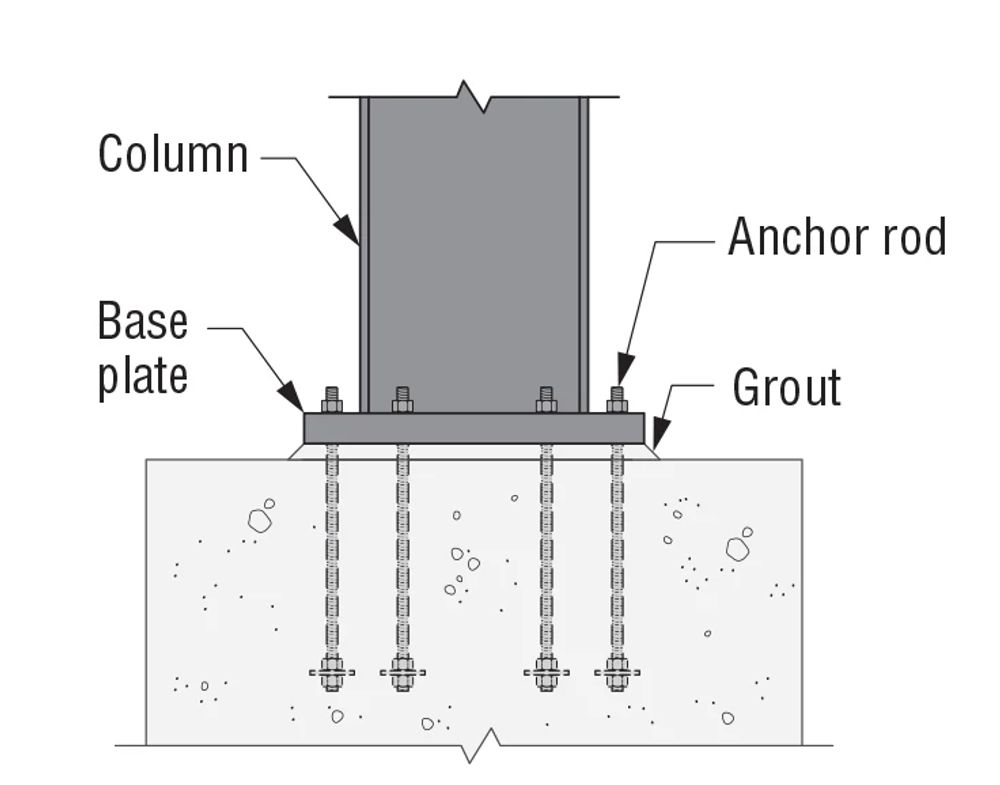 b) Non-Embedded “Rigid” Base Plate
Figure A4 — Fixed-Base Solutions