When specifying a premanufactured shearwall for a project, several factors need to be considered, such as load values, seismic/wind requirements, wall width and height, wall placement, etc. Cumulative Overturning is another critical factor often overlooked in multi-story applications.

Designers are accustomed to accounting for cumulative overturning when specifying multi-story, site-built plywood shearwalls. However, when specifying premanufactured shearwalls, designers typically calculate shear loads based on the building geometry and code loading requirements. A wall is then selected based on its ability to meet or exceed the required shear load using manufacturer-provided allowable shear load tables.

What can get lost when considering shear capacity only is that the shearwall is not only governed by shear, but also by a combination of other limit states, including drift, tension and compression, flexure, anchor rod tension, and concrete or wood bearing stress. For single-story walls, the allowable shear given in the load tables is the lowest value of the various limit states. However, additional care must be taken in the analysis of multi-story shearwalls to account for the way the loads are distributed over the height of the building.

In multi-story structures, shear and the associated overturning forces due to seismic/wind requirements must be carried down to the foundation by the building’s lateral force resisting system. These forces are cumulative over the height of the building, and shear forces applied at the second or third levels of a structure will generate much larger base overturning moments than the same shears applied at the first story. If cumulative overturning is not considered, the design may result in forces several times higher than the capacity of the lower wall, anchor bolts and foundation anchorage.

The effects of cumulative overturning are automatically taken into account when designing shearwalls with the Strong-Wall Shearwall Selector web application.

Shear Only vs. Shear and Cumulative Overturning Analysis

The graphic illustration below compares how the total allowable shear load is impacted when the effects of cumulative overturning are included in the analysis. As a point of reference (Figure A), a one-story, nine-foot tall shear wall with a 5,000-lb. lateral load capacity is used. The reference wall has a resulting base overturning moment capacity of 45,000 ft.-lb. and an overturning force of 22,500 lb. assuming a 2 ft. moment arm. As illustrated, if the same base shear is applied over two stories, the overturning at the base of the wall exceeds the one-story application by 60% (Figure B). When proper consideration of cumulative overturning is included in the design, the total allowable shear load on a stacked wall is reduced (Figure C). 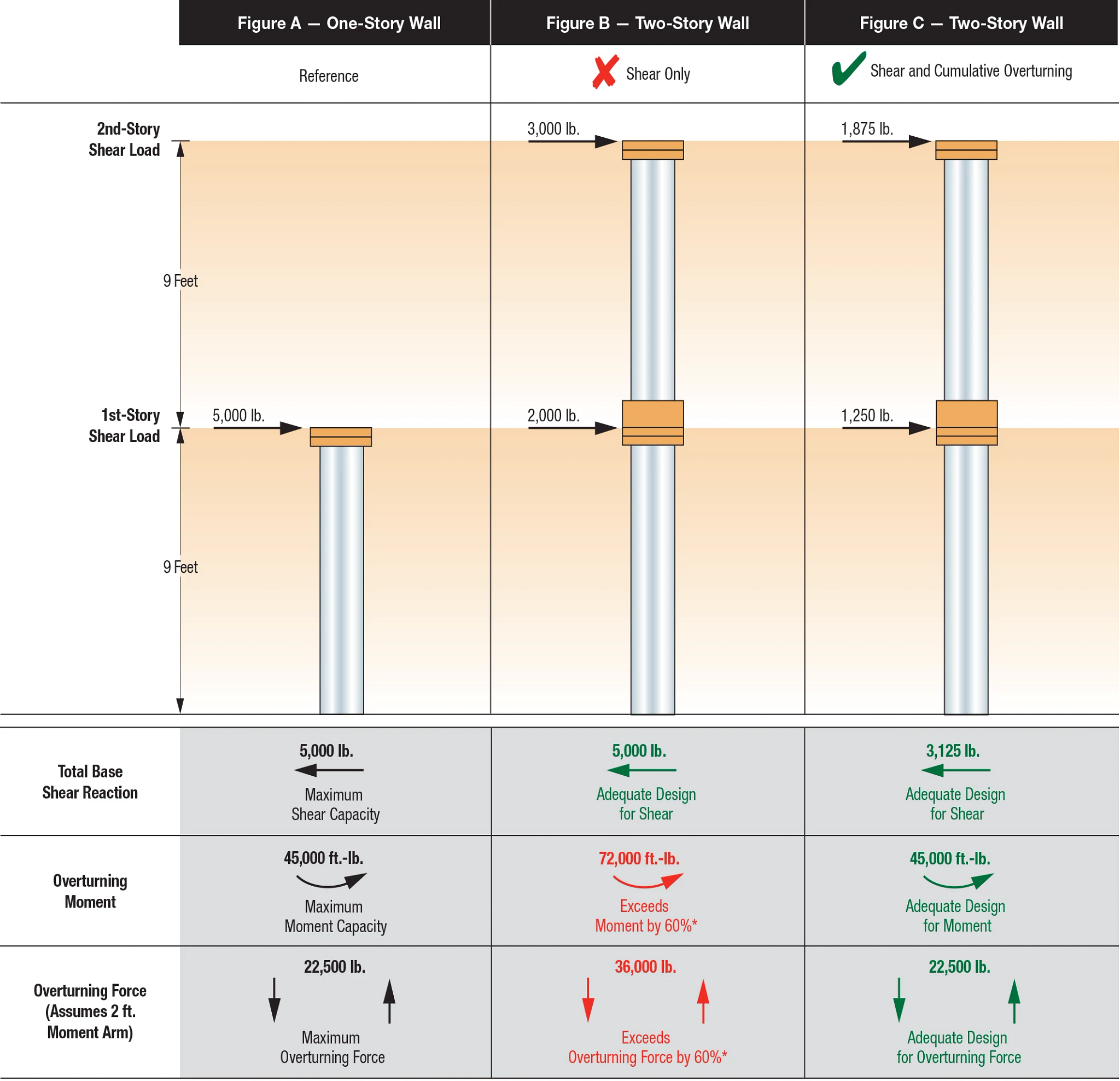 Note: Loads shown are for illustrative purposes only. Redistribution of earthquake loads per building code requirements will compound the effects of cumulative overturning.