ASCE 7 requires steel moment frame systems to account for the contribution of panel zone deformation to the overall story drift. Panel zone deformation can be accounted for in analysis software by explicit modeling of the panel zone (e.g., using the Krawinkler model or the Scissors model). Nevertheless, traditional structural analysis using centerline-to-centerline dimensions (i.e., beam and columns represented by lines intersecting at a node) is a practical way to account for panel zone contribution according to the NEHRP Seismic Design Technical Brief No. 2, Seismic Design of Steel Special Moment Frames: A Guide for Practicing Engineers.

In addition to connection modeling, if the member has any modifications such as in an RBS connection, designers shall account for the additional deformation due to the reduction in the member flange width at the reduced beam section. For frames with RBS connections, this reduction can increase drift by approximately 5%–10%. For the Simpson Strong-Tie Yield-Link moment connection, there are two ways to model the Yield-Links easily in structural analysis software for elastic code design: 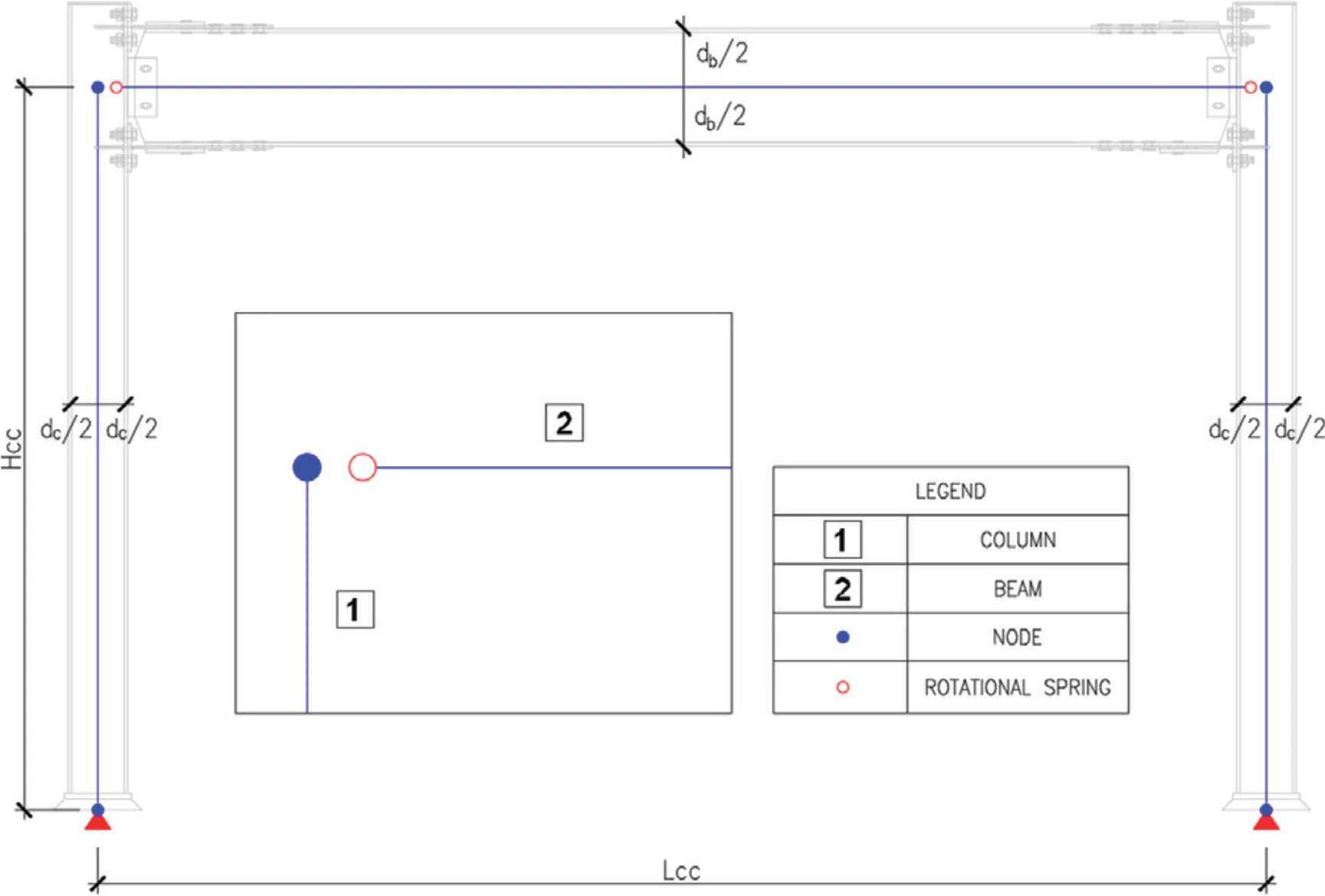 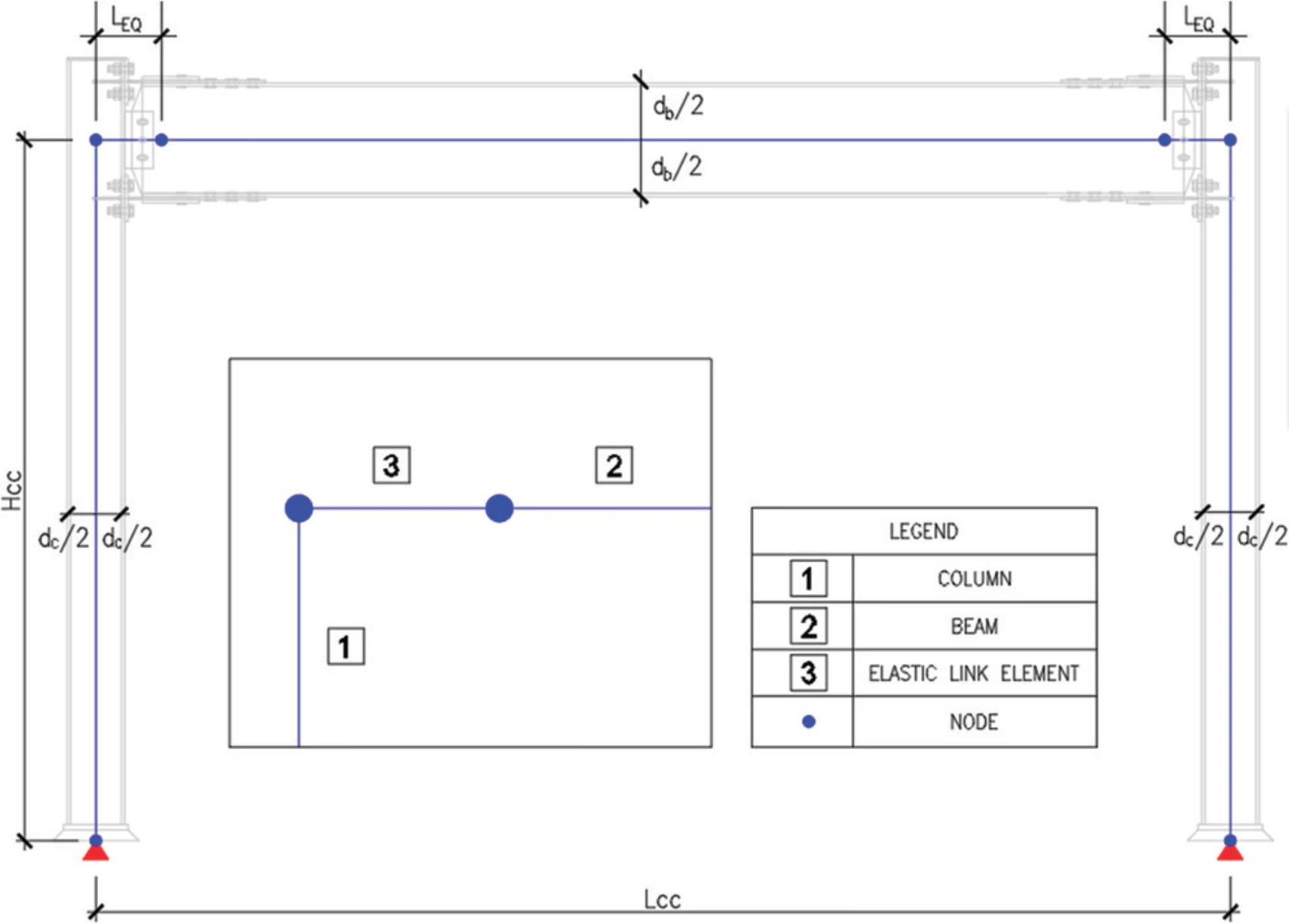 The method with rotational spring is for structural analysis software that has the functionality to assign partially restrained (PR) releases to the ends of a beam. The Equivalent Elastic Link Element method breaks up the beam into three elements with the two end elements representing the connection stiffness by using a reduced moment of inertia. For more information regarding these two modeling methods for the Yield-Link, please refer to the Yield-Link Moment Connection Modeling Guide (F-L-SMFYLCMG).

For performance design requiring modeling of the Yield-Link moment connection’s nonlinearity, the user can follow the step-by-step procedure to calculate the axial link or rotational link parameters for the Yield-Link moment connection documented in Chapter 12 of AISC 358. Once the parameters are calculated, designers can use any software that has nonlinear elements to model the Yield-Link. These elements can be nonlinear axial spring elements (shown in the SAP2000 input below) or nonlinear rotational spring elements. Contact Simpson-Strong Tie if there are any questions regarding modeling the Yield-Link in your structural analysis software. 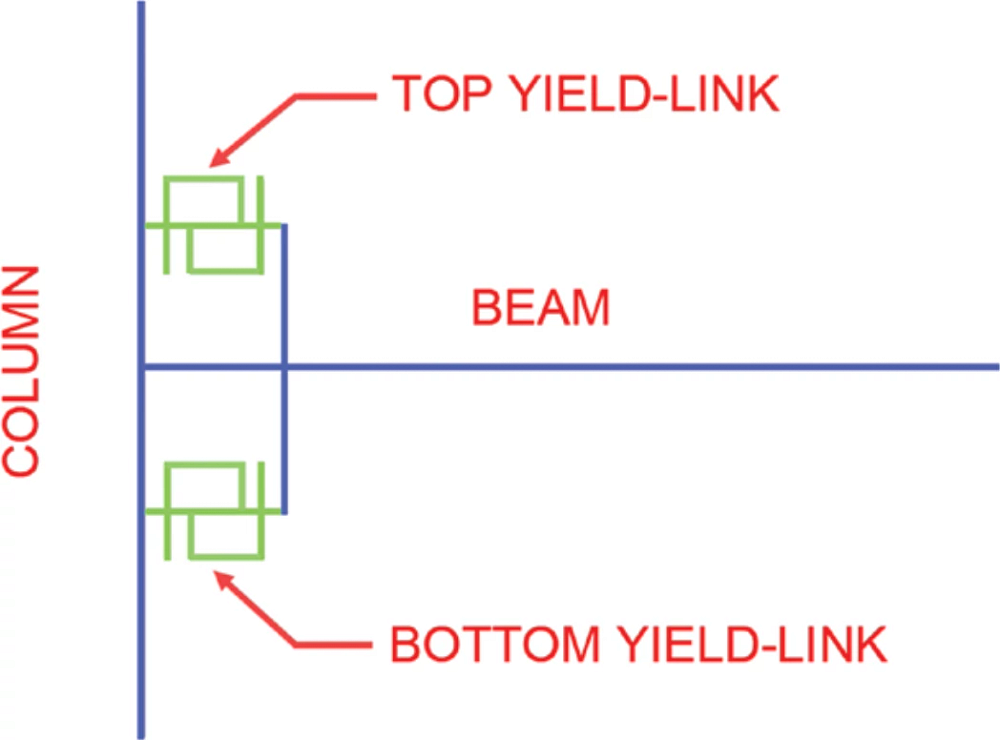 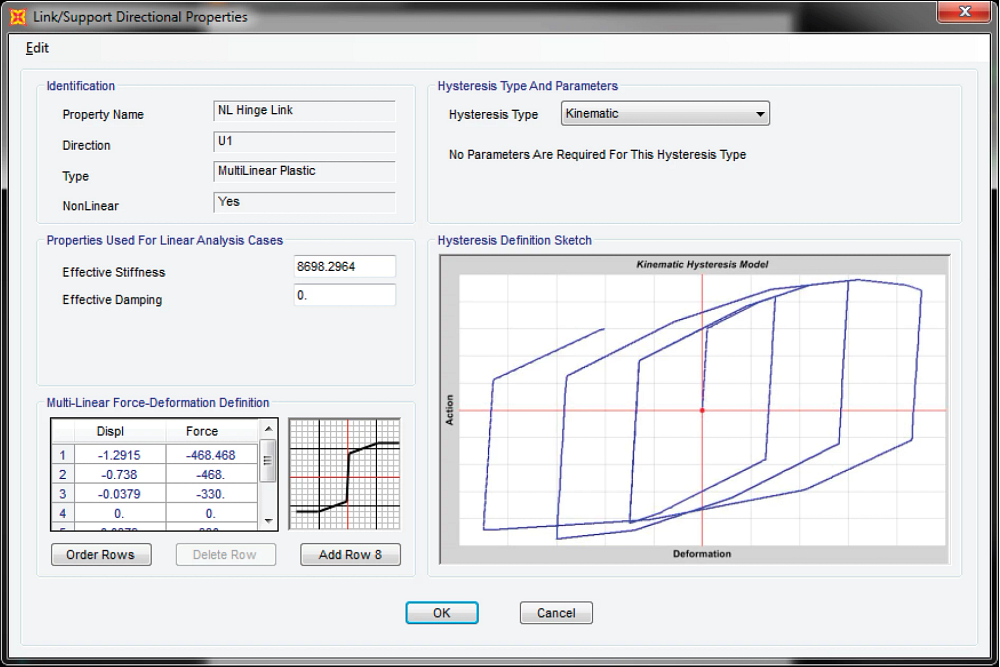 Column base fixity has a considerable effect on the performance of moment frames. Currently, engineers typically assume either a fixed-base connection (Figure A3.1) or a pinned-base connection (Figure A3.4) in the analysis of moment frames. In reality, the performance of the connection is in between the two limits. Figure A3.2 shows the AISC definition of a fixed, a pinned and a partially restrained (PR) connection in a graphical format. Connections are considered fixed when the moment versus rotation stiffness is greater than 20 EI/L of the member, whereas a connection is considered pinned (simple) when the stiffness value is less than 2 EI/L.

Figure A3.2 — Connection Classification per AISC 360

Figure A3.3 - PR Base Detail Connection per AISC

Figure A3.4 — Pinned Base (Simple) Connection in AISC Design Guide #1

Table 1 below shows the effects of base fixity on the different performance parameters. Pinned column bases will have a higher drift. However, they will have lower floor accelerations than columns with a fixed-base connection. A partially restrained base will behave somewhere in between pinned and fixed bases. Compared to a frame with pinned base connections, a frame with PR bases will have less drift, higher base shear and higher floor accelerations. Base plate and anchorage design is per designer in accordance with typical codes and guidelines and not specific to Yield-Link moment connection or part of the design tools.

AISC 360-16 Chapter C requires that structural stability be considered in design. Typically, designers are familiar with the use of the effective length method (AISC 360-16 Appendix 7) for stability design. However, since the Yield-Link moment connection is considered a PR connection, the alignment chart used for calculating the K-factors requires some modification due to rigid joint assumption in their development. For columns connected to beams at both ends with PR connections with a rotational stiffness Krot, the modified stiffness distribution factor per Chen and Lui (Stability Design of Steel Frames, 1991) is given as:

For the General Second Order Elastic Analysis, stiffness reduction factors for EI and EA are required; typically a factor of 0.8 is applied to all the stiffness that is considered to contribute to the stability of the structure.

For more information regarding which Direct Analysis Method to use, the designer should review AISC 360-16 Chapter C, Appendix 7, Appendix 8 and the technical manual for their structural analysis and design software.